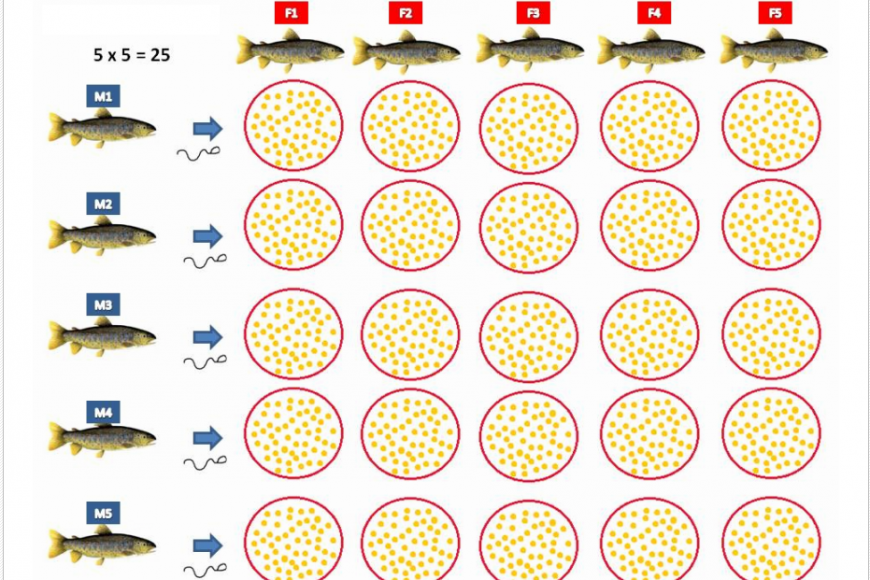 As we have already said elsewhere, the first step is to select the breeding stock. The specimens are captured, temporarily retained and genetically characterized (or recognized, if already marked).

Male migration begins first, therefore the semen is taken first, which is put to freeze in the cryobank. Subsequently the eggs are taken from a certain number of selected females calculated considering the carrying capacity of the breeding sites, to maximize the reproductive yield and not to negatively affect the natural deposition.

Once the gametes are obtained by squeezing, a protocol with a fertilization matrix is ​​applied to maximize the genotypic diversity between offspring: the eggs are divided into aliquots and fertilized with semen aliquots by a high number of males according to the scheme of the fertilization matrix.

This cross scheme allows all possible combinations in pairs. The artificial reproduction activities are performed at different times and on several occasions, to allow the natural extension of the reproductive season.
Once fertilized, the eggs are kept in the incubators of Rocchetta and Oratino, laid in running water on special grids and 7-14 days before the expected date for hatching, only eyed eggs will be used for sowing.

Any cookies that may not be particularly necessary for the website to function and is used specifically to collect user personal data via analytics, ads, other embedded contents are termed as non-necessary cookies. It is mandatory to procure user consent prior to running these cookies on your website.